Science should not be done in ivory towers. It is important for researchers to reach out to the public and engage in science communication in order to get feedback and increase interest in one’s work. Especially in robotics, we see it as very important to engage in discussions with the public. Robots and artificial intelligence will impact all our lives in future and potentially reach a pervasiveness that exceeds that of smartphones. Thus, it is very important to communicate the potentials but also pitfalls of this technology.

In “Touching Robotics”, we aim at engaging young people to join in on the discussion about robots and their future impact. We provide background knowledge and aim to gain feedback from a generation that is unheard so far in the discussion.

To achieve this, we organize a annual event for pupils called the “Summer of Robots”. In this three day event, young people can learn about modern robots, their capabilities and how they are programmed and used. We combine educational events with games and exciting activities to reach a maximum of output for the participants. One day is always dedicated to robot ethics and discussions on fears and wishes of young people when it comes to future robots. Our goal is to raise awareness of that important topic but also to gain insight for the future developments in our field. After all, the people who are now in school age will be the ones most affected of what we are doing in research today.

So far, we have hosted two instances of the “Summer of Robots”. There will be another event in summer of 2019. In addition, we are trying to transfer this successful format to a Europe-wide initiative.

This project is funded by the Carinthian Economic Promotion Fund (KWF). 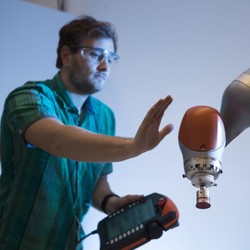 This essay summarizes the claims on IT security that have been presented and discussed during the workshop “YuMi in Action! Ethics and …
Michael Funk, Peter Reichl, Bernhard Dieber
PDF Project DOI

We are living in a social submarine! Children are still the better adults.